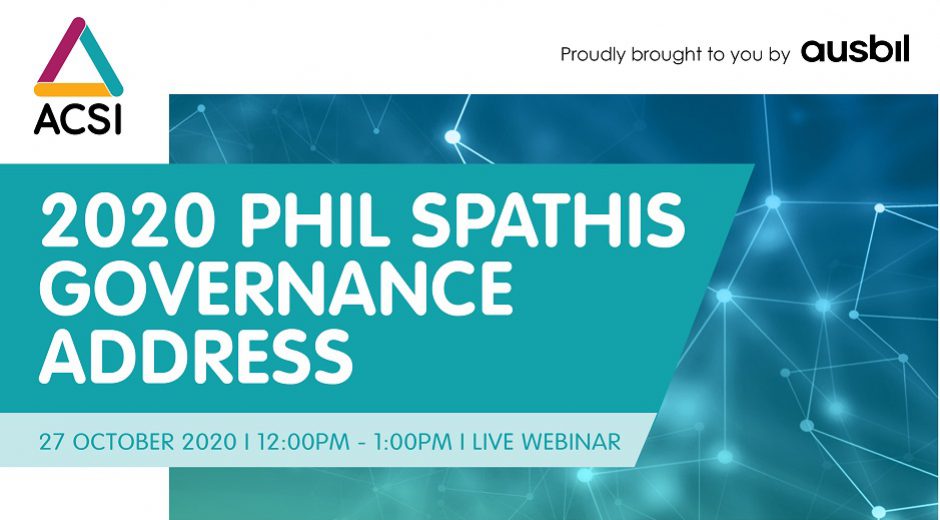 ACSI is proud to host our fifth Phil Spathis Governance Address, to honour the memory of our late colleague Phil Spathis and his commitment to the principles of good corporate governance.

This event is a charity fundraiser and all proceeds from the registration fees
will be donated to the Cure Brain Cancer Foundation.

This year, we are fortunate to have former Director General of Australia Security Intelligence Organisation (ASIO) speak on ‘The modern-day dangers of Cyber Security and building cyber resilience’

David is the retired Director General of Australia Security Intelligence Organisation (ASIO) and was also head of the Australian Secret Intelligence Service (ASIS). Cyber security is a real threat and David Irvine is in a rare position to counsel Australian companies on the both the dangers faced today and the solutions.

David Irvine is unique in the history of Australian intelligence, a long-serving diplomat who is the only person to have served as the head both of Australia’s foreign intelligence collection agency and its domestic security agency – positions he held for a total of twelve years. His extensive experience in the management of national intelligence agencies in a liberal democratic political system and under the Rule of Law gives him a special perspective on national security issues, including the countering of terrorism, espionage and other covert threats to national security.